According to him, all the statements he made in the videos that went viral are all false, adding that his father is the best father he could ever wish for.

“Thank you for loving me even through all the trials and tribulations,” He wrote on his twitter timeline. 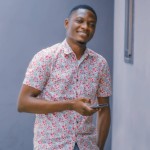 Joe Mettle to Host Praize reloaded on his birthday with friends.

You may have missed

4 Ways To Break Up Your Fallow Ground – Pastor Mensa Otabil